In a Sept 20 post, referring to the new Microsoft ads featuring Jerry Seinfeld and Bill Gates, Seth Grodin writes:
"Microsoft has fallen into a trap that befalls many large companies in search of cred, buzz or respect. They've decided to buy some via advertising."

You have to feel for the PC world. Apple has hipster cool, music cred, and the entire design world sitting on its lap. Meanwhile, you get the idea that if you took a walk around the Death Star, you'd find the halls lined with Dells: 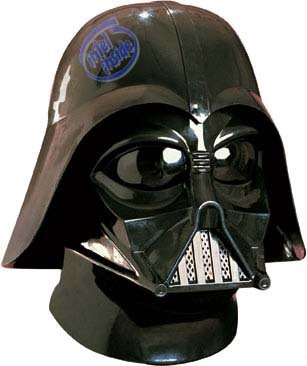 Grodin goes on to compare the enthusiasm of the Google/Apple employee with the relatively sedate and "bureaucratic" world of Microsoft/Windows. Still he does allow that this isn't entirely to Microsoft's disadvantage, stating, "The world needs reliable bureaucracies that mollify the needs of corporations and individuals in the center of the market."

A recent trip to the Apple store on 14th street brought to mind the dichotomy between the Mac and PC worlds. Walking into the store, there was no clear delegation of where to go to address specific problems. A friendly (and entirely too plucky) staff was available to address any questions at hand, but the significance behind their colour coded t-shirts were lost on me. Were they all available to address questions? Did an orange shirt mean staff and a blue shirt mean manager? The blue tooth devices lodged in their ears weren't helping either. Sometimes you need the no-nonsense approach of the DMV: this line is for paying tickets, this line is for your driver's test. Take a ticket, sit down, shut up, and you will be helped shortly.

As far as the Seinfeld ads...it doesn't really address the perception that Windows is a dry, sometimes frustrating experience while Apple is fun and user-friendly. Softening Bill Gates' image as an imperious software mogul isn't the same as addressing concerns about Windows Vista. On the other hand, maybe he's got a future in comedy: his straight man schtick is pretty funny, and nowhere near as obnoxious as Seinfeld's mugging.

Posted by adriansol at 3:41 PM