Re: Bruce Nussbaum - Did Innovation Cause The Crisis on Wall Street?

Bruce Nussbaum - Did Innovation Cause the Crisis on Wall Street?

The stock market is crashing, housing prices are plummeting and the economy is poised for a severe downturn so I’m reminded of the criticism I heard at the World Economic Forum in Davos in January that innovation is responsible for this mess. A European banker came up to me and and said, “isn’t innovation at the root of all our problems?” “All those new financial instruments failed, right?”

He’s right. So what went wrong? I’ve talked to a lot of folks and the answer lies in the innovation process that took place on Wall Street. Hundreds of hugely complex products based on hugely complex mathematic financial models were created and sold around the world—without first being tested out. There was little or no real-world iterative process. Commercial ankers, hedge fund managers and investment bankers didn’t know what would work or not work in a troubled economic environment, such as one where housing prices fell sharply. In fact, the complex financial instruments were supposed to spread and reduce risk. In the end, they did the opposite. In short, the innovation process was flawed. New inventions were not stress-tested in a real enviroment.

Second, the new financial products were flawed. They were opaque—not transparent. They were sold to investors who didn’t really know what they were buying. Instead, they relied on the rating agencies to tell them the value of the products—if they were AAA or BBB. But that didn’t work. The rating agenices had mathematical models that didn’t work in a period of sharply falling housing prices. In the end, no one really knew what the new products were worth. Worse, when trouble came, those who sold them didn’t know how to fix the products. And they didn’t take responsibility for replacing them—in part because they didn’t know what they were worth. Again, bad innovation process.

There is a great new book out by my friend and colleague Stephen Baker called The Numerati. It’s about the rise of a new class of mathematicians, computer scientists and numbers people who collect the growing mass of data we emit and create new things based on the patterns and similarities. Think Google. The Numerati are the people who rule the data—and our lives.

My one question to Steve—have the Numerati caused the crisis on Wall Street by innovating new financial products based on bad models and poor process? And do we have more to fear from them? 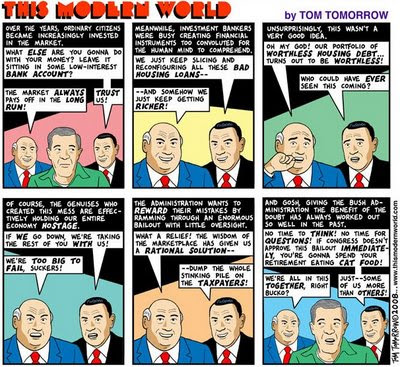 In his Sept. 15 post, Bruce Nassbaum speculates that technological innovations may have been the contributing factor to the current financial crisis. It's a tempting hypothesis: the fear of modernization, from the steam engine to Charlie Chaplin's "Modern Times" to the dystopian works of science fiction writers like Aldous Huxley and Philip K. Dick, to movies like 12 Monkeys and the Matrix and beyond, we've always been fascinated/horrified/wary that the very things created to simplify our lives would turn against us in some fantastical way.

However, in this article for the Dallas News, Dave Michaels offers a more humanistic explanation: greed, and a lack of federal oversight were the root causes of this meltdown, and the innovations used were merely the tools that enabled them.

"Regulators and lawmakers allowed financial companies to police themselves while dismissing the need for rules to restrain the number of bad housing loans or the amount of debt Wall Street firms could take on.

Banks and brokerage firms invented new, complex products – many of them exempt from regulatory controls – to support growing numbers of risky mortgages.

Financial deregulation and the creative debt products that resulted made many on Wall Street and on Main Street wealthy, but they have left taxpayers to pick up the tab."